Leaders need to practice Assertive Leadership in order to be as effective as they can be.

This video explains some of the detrimental impacts Passive Leaders have on their employees, teams, and their organizations. 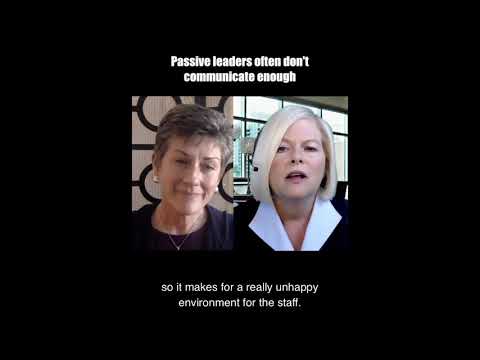 Below is a transcript of the video above.

Donna, the other side of that continuum that we were talking about, right? Assertiveness from, assertiveness, passive aggressive. What’s the impact of a leader who’s too passive?

Well, what happens is the leader doesn’t give performance feedback as often or as specifically as they should. They don’t bring ideas up in meetings. They don’t represent the interests of their department. So, more pressure is on their people and they don’t resolve conflict with other departments, and so it makes for a really unhappy environment for the staff.

Wow. Yeah. I never thought about before, the fact that the person who doesn’t give specific feedback, constructive, helpful, specific, even if a little bit painful feedback, the person that says, “Good job,” that could just be passivity. Really.

Yes, absolutely. They, because they see giving feedback as conflict, and they’re avoiding conflict. But what happens is people get demotivated because they don’t know if they’re doing a good job or not. In some cases people like this don’t do performance appraisals.

We even had a CEO that did that, actually two, that didn’t do performance appraisals. Most people want to keep improving, and if you don’t give them guidance on where to improve, then they can’t make improvements. Most people want to give good service and they want to support their colleagues. But if they’re not guided, then it makes it really hard for them to do their best.

View the next Assertiveness Vlog!