As Leaders Are Promoted, They Get Less Positive Feedback

We All Need Positive Feedback

Positive feedback helps us maintain our motivation, increases our resilience, and cements our commitment to the hard goals we must attain.

Oprah Winfrey says that every person she has ever interviewed, no matter how high up or successful, including President Barack Obama and Beyoncé, has asked the same question after the interview:

“Everybody that I ever interviewed after every interview at some point somebody would say, ‘How was that? Was that OK? How’d I do?’ — Oprah Winfrey

These highly successful people are seeking positive feedback from a very well-respected interviewer.

However, studies show that as leaders are promoted, they get less and less positive feedback.

This can be detrimental to the leader who is not receiving feedback and to their career. If you don’t receive positive feedback, how do you know that what you’re doing is right or effective?

Feedback (both positive, constructive or critical) is essential to achieving high performance.  Actors and musicians get applause, but what do Executives get?   Crickets.

Does the Absence of Positive Feedback Adversely Impact Leaders?

According to Cambridge University, giving feedback may be the most important skill a leader can have.

But studies show (and every Employee Satisfaction Surveys we’ve ever seen have shown) that leaders are not giving enough positive feedback to their employees and their teams.

This may be because leaders are often focused on getting a task done, rather than focusing on supporting the people they lead.  But, it may also be that not receiving positive feedback impacts a leader’s ability to give positive feedback effectively.

Make Sure You Give Positive Feedback to Leaders at Every Level

Positive feedback from even from subordinates (and colleagues) can have a positive impact on morale, resolve, and motivation.  So, make sure you are giving 360 Degree positive feedback!

As Leaders Are Promoted, They Get Less Positive Feedback – Video 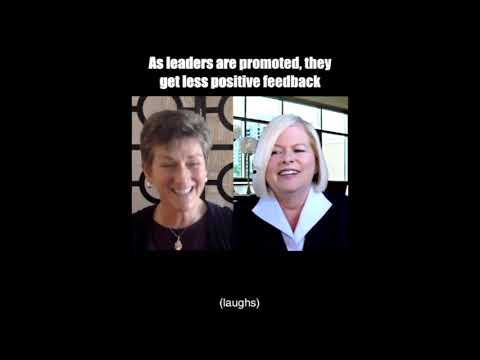 As Leaders Are Promoted, They Get Less Positive Feedback – Video Transcript

When I heard you say that about the leader actually changing and asking for that kind of feedback, what I thought was, “Isn’t there some research?” I don’t know what it is, but there used to be something about what happens if someone rises up over the course of their career, I think feedback drops dramatically that they’re receiving.

And if you look at employee survey scores, which I’ve worked with year after year after year, that is almost always the lowest score is getting positive feedback.

Leaders just don’t stop and do it. They’re too focused on the task. It’s a wonderful book, please read it.

I knew they didn’t get it. And I knew that I wanted to help reinforce the behaviors that I thought weren’t good in them. Sometimes people just say, “Oh, at my level, I don’t need any feedback.”

Well, maybe you don’t need quite as much, but you still need positive feedback, you still need thank yous and all of that goes a long way to motivating.