Coaching can help CEOs be more assertive, and therefore, more effective leaders. Assertiveness is one of the most important traits a leader can have.  In fact, according to a study by Forbes, 71% of leaders that ranked high in both assertiveness and good judgment were considered the best leaders.

Not All CEOs Are Assertive

Some CEOs have a passive leadership style that is shaped by their personality traits, beliefs, values, and/or past experiences.

Here’s the story of one CEO who transformed his leadership approach to be much more assertive. 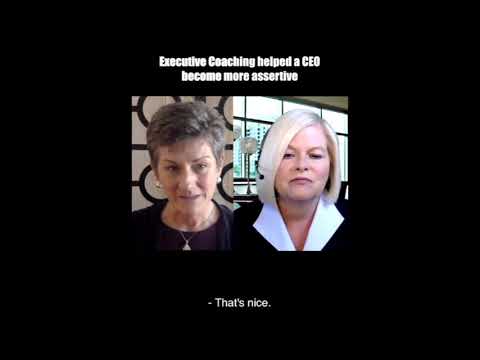 So how did coaching help this passive CEO?

There was a lot of things, but I’ll pull out two. One of them was going deeply into his DiSC Assessment because it pointed out where he naturally was more passive. He was more analytical, he was more passive, and so it pointed that out so that he learned about himself more. He started asking his wife, he started asking people in the organization, “Is this true about me?” just having deeper thoughts around it.

The DiSC can be a really great jumping-off point to create actions and to identify behaviors to practice so that you stretch into being bit more of some of the other types, so that you’re not just the one type that you’re tied to.

Introverted CEOs Can Have a Passive Leadership Style

Yeah, yeah. What about his coach? Was the coach able to … I mean, I don’t know if he was, but it sounds like he might’ve been an introvert?

Yeah, introverted, and so that played into it as well. Extremely introverted, extremely analytical. The coach was able to ask him questions to help him understand his style more and also understand that he needed to stretch into other places and create actions on how to do that. That was one of the ways that we worked with him, and then there was another way, which was even more interesting.

Yeah? Are you going to tell me that one?

Yes. He started to trust the coach more. You could imagine that somebody that is very analytical and introverted doesn’t trust quickly, so over time trust was built with the coach. As the trust was built, they were able to go deeper and they were actually able to find that there were some negative cognitions that his mother had instilled in him while he was young that were impacting some of his behavior as well.

We found out that his mother had told him don’t trust anyone and had told him that he was insignificant and incapable. Sometimes that happens in childhood and if it’s too deep and we can’t chip away at it, we definitely refer out to a psychologist for this work, and sometimes it’s done in tandem, but in this case it was okay and we made progress by seeing them, journaling about them, drawing about them, and then replacing them.

He replaced that with, “I am capable. I can trust most people, and I know when I can’t trust someone. I can trust myself to be discerning with that.” He also came up with sort of a mantra of “being assertive means intervening in bad behavior, it means fostering collaboration, and it means dealing with conflict head-on.”

That’s nice. Would that be a coach assignment or invitation?

Yeah, it would be an invitation and he chose the ways he would play with that. What he did was repeat that while he was walking in the morning. Then he had discussions with the people in the organization that he trusted about what does that mean. He wrote a leadership vision that included that and he really stepped into that new leadership vision. Over time, he became quite a bit more assertive.

Wow. What was the impact to the organization?

It was really, really nice. Well, for one thing, the board wasn’t as worried about him, so that was one thing.

The CEO’s Assertive Style Created More Collaboration Within the Organization

The board wasn’t as worried about him. He came voluntarily to coaching, he wasn’t sent by the board, but he knew that there were some concerns. He ended up firing some people that needed to go, who were directly insubordinate to him even, in person.