Often, Leaders think they are being Assertive when they are actually showing Aggression. In order for them to become Assertive, they need to understand:

Sometimes, a Leader’s behavior is perceived by their team as Aggressive, when it is not their intent to show Aggression.

This video is a Case Study of how employees perceived a Leader as Aggressive when that was not her intent. This Leader changed the behaviors, with the support of her Leadership Coach, so that her team could feel that she was being Assertive and not Aggressive.

In this case, the leader’s management engaged a Coach for her and her position with the company was at risk. 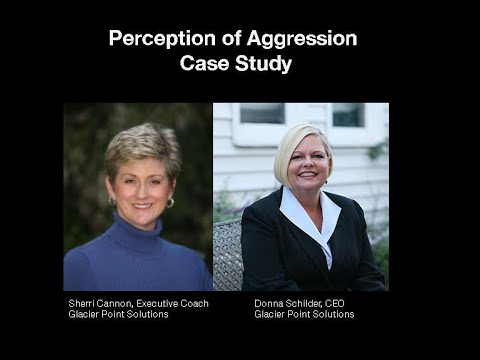 Below is a transcript of the video.

Do you have an example of an aggressive leader that you’ve worked with who just didn’t realize they were aggressive?

Yes. Now this is a special example. There’s tons of them that didn’t realize they were aggressive, and then there’s some that do and they just think that’s the right way to be. So with that, we have to give them evidence about why that doesn’t work.

But with this example, there was a cultural difference that was driving different behavior that was interpreted by the team as being aggressive. And it had to do with walking really fast and moving really fast, and it had to do with standing over their people and peering down on them when they were talking to them, body language and so forth. And so we were able to go deep and help that person see those behaviors.

But before she came to us, she knew that she was aggressive, but she didn’t know how to do anything about it. So sometimes what companies do is they give people feedback, but they don’t give them any help for how to make the change. And even if the person wants to change, they can’t, because they don’t know the path. And that’s a lot of what coaching brings to the table.

So how did that coach help that client see it? What can you tell about that?

Limiting Beliefs Can Drive Leaders to Be Aggressive

Well, definitely dug down into the beliefs and helped identify the boss employee relationship and how she was educated to see it as a very subordinate, top down way of thinking, and then pointing out that the American culture doesn’t see it as much that way.

And really looking at where those beliefs came from, where they are in the culture, and how American culture is different, then building different beliefs based on the new culture. So it’s actually sort of an assimilation. Even though this person had been here for 17 years, they still hadn’t completely assimilated into the way we think leadership is more effective.

So she was able to do that by examination, and there was also some Skype where they were able to see the movements and the postures, because when a coaching client describes how they do things, they do it the way they do it. They can’t behave well. They peer over you. So that’s how they worked with that client.

Yeah, I see how that works. So what was the impact? Was there an impact in the organization from that?

Oh yes. Oh yes. The person slowly was able to change. People immediately noticed that there was change occurring. She let the staff know that she was working on changing, and there started to be some joking back and forth when she’d slip into the other behaviors.

So that common language came up. And then what happened was the employees became much more engaged. They were bringing problems to her rather than hiding them, and she wasn’t getting blindsided as much. And just everything started working better.

And so she started to really feel that, too, that they were fighting their boss.

Yeah. She knew she wasn’t connecting with them. She just didn’t know why. And so being able to connect with them more was really, really good for her.