Where are You on the Assertiveness Continuum?

Once a leader sees where they tend to operate on the Assertiveness Continuum we help them identify what the indicators are that they aren’t operating in an Assertive way:

Once the client is able to identify when they aren’t being Assertive, we help them identify and practice new ways of behaving that are more Assertive.

Sherri Cannon and I discuss this further in the video below: 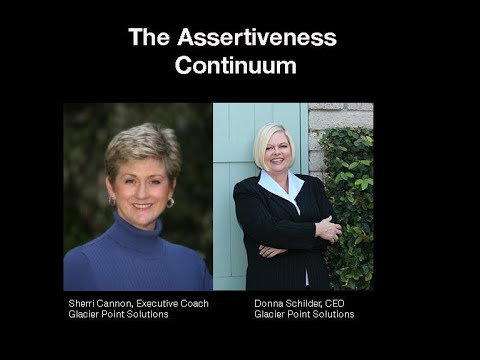 This video is the first of two parts explaining the “Assertiveness Continuum” and how knowledge of it can help leaders be more assertive.

Donna, we’ve got something here called the assertiveness continuum. Can you describe this in terms of behavior for us?

Yes. There is a continuum of passive, assertive, and aggressive. On the left side of the continuum is the passive approach, in the middle is assertive, and on the right is aggressive. We want to operate as near to the middle most of the time as we can. Some people operate mostly going back and forth in the passive range and some people interact mostly in the aggressive range, but what we want to do is pull people more to the middle, although being aggressive and passive at some points are important as well.

Are you a Chandler Bing (a Bit Passive) on the Assertiveness Continuum?

The passive approach is if you think of a television character that’s passive. I think of Chandler Bing from Friends. You can even see in the show that as it progresses he becomes more assertive, and as he does he gets better jobs and he gets Monica. So, his life is actually happier because he gets more assertive. That’s a great example of that side.

Are you a Walter White (very Aggressive)?

The example of aggressive that I like is Walter White in Breaking Bad. He is the ultimate aggressor. He does not care what happens to the other person. He just wants to win and get what he wants.

In the middle, when I think of the assertive professional, I think of Leslie Knope on Parks and Rec. She is assertive and she communicates what she wants. She gets people excited, she gets people involved, she treats people with respect, and she’s just a great example of an assertive leader.

Those are the dimensions of the continuum, and so we all want to move more towards Leslie Knope, I guess.

Absolutely. That’s so helpful. As a leader looking at this then, what does the concept of assertiveness on this continuum actually mean for me?

What it means is that you have choices for how you behave and that you need to make a choice based on the situation to create the best business outcome. You may want to lean a little right of assertive in one situation and a little left of assertive in another situation. But if you don’t know about this and if you’re not clear when you’re being each of these and what the behaviors are, you don’t have the choices and you default to whatever you’re most comfortable with.

Right, default always. I find it’s so interesting to me that it’s not just like hit the middle and stick there, but that this, as you’re saying, really represents choices. I think like most of us, they or us or whoever we are, but leadership development folks, experts, would say you want to be in that assertive range more of the time. But I’m also hearing that there are times to actually choose aggressive or to choose passive, so tell me about that.

There are Times When Being Aggressive is a Good Choice

There are Times When Being Passive is a Good Choice

There’s also times when being passive is more appropriate. It could be when your boss is really emotional about a certain topic. It’s just good to roll with it if they’re really strongly feeling that a certain solution should be implemented. Also, if a customer is really angry, at least initially you’re going to be a little passive and then you’re going to move into action and be assertive.

I hear that there’s really, like if a leader begins to really master being in the ideal place, a range on this continuum, then they can be more effective. And would it be right? What’s happening for their own feeling about just contentment wise or happiness? What do you see in Coaching?

I always want to say that it’s very difficult to follow an unhappy leader. I do think that part of our job as a coach is to help people be happier, and this is one way we do it. Because there’s less conflict when you’re assertive, things go more smoothly, you don’t get surprised by things as much, you take care of your employees and your staff and they’re happier.

And when they’re happier, you’re happier. And when you take this home and you’re more assertive with your loved ones, you’re going to also be happier. And that’s true with your children, your spouse. It’s just a more direct way of communicating. You let people know what you expect of them, what you want of them. You give them feedback in a timely manner, you directly communicate, and that does make us happier.

Donna SchilderI want to say THANK YOU for all your help during my coaching sessions for my...
Scroll to top