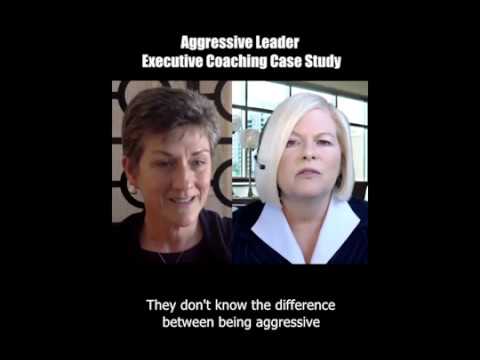 Below is a transcript of the video above.

So, when I think about Assertiveness, it seems to me like a lot of leaders think that they are assertive, when in fact they’re actually not assertive. They’re aggressive. So, I wonder in all of this experience, what have you and your team of coaches learned to be true about your clients?

Then, we go on to helping them understand when they’re being aggressive by examining their interactions and rewinding them. And then, once they can identify where they tend to be aggressive, we instill the assertive behaviors and mannerisms and thinking, and they replace that. And so, they’re able to go and react differently.

That’s great. I know when I talk with people about coaching, that people still ask, “Yeah, but how do you do that?” So, my question I think for you is what about somebody that just really doesn’t see it? How do you as a coach work through that?

How Can Leadership Coaching Help an Aggressive Leader Be Assertive?

Yeah. So, you start by helping them see it through questions. But oftentimes, inventories like the DiSC Assessment and the MBTI and other inventories help them start to see the behaviors that are different and what their personality drives in them. And sometimes, we’ll either get them to talk to people they really trust, that they know really trust them, and really seek honest feedback. But they have to convince the person that they’re not going to attack them or that they’re not going to retaliate. They have to create trust that they really will receive that feedback and not have an emotional response.

Another way is through 360 Degree Assessment. But to me, that you have to be careful with because oftentimes people won’t be honest. And then, the leader comes back and says, “Oh look, I’m not aggressive. I have proof.” So, that doesn’t work very well. So, you really have to examine the organization and train the organization on how to respond to a 360 and assess it and really make sure that it is truly honest. So, that’s a downfall with that methodology.

Yeah. That’s so interesting. I love that you know that too. That’s the downside of the 360, when it doesn’t work like that, nobody ever wants to tell the truth on one again.