You may be surprised to learn that a CEO can be passive, but, we’ve worked with many CEOs and C-Suite leaders who are passive.

A passive C-Suite leader may avoid dealing with conflict, delay decision-making, skip rewarding high-performing employees, and/or delay initiating the progressive discipline process or employee termination.  They may allow bullies to wreak havoc on the team and the company.

Their lack of dealing with problems can create a toxic company culture or high levels of stress in their employees, both of which adversely impact productivity.

Lack of action impacts their employees’ ability to do their jobs.  Since passive leaders don’t deal with conflict effectively and don’t model how to deal with it effectively, there may be a great deal of unresolved or protracted conflict within the organization, as well as a sense of uncertainty.

Basically, a passive CEO can have a negative impact on all aspects of a business and its bottom line.

Additionally, a CEO’s passivity may impact their job retention and career potential.

Luckily, passive CEOs can work with an Executive Coach (Leadership Coach) to become more assertive and we’ve seen that leaders who move from a passive approach to an assertive approach can turn things around in a company quickly. 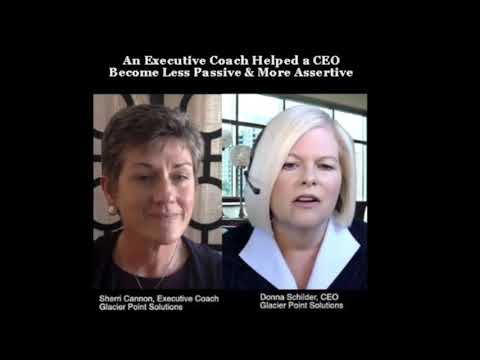 Donna, how does an executive coach help a leader who is over-relying on a passive approach?

Well, I first want to say that if a leader isn’t assertive, the bottom line is that they are not as effective as they could be. And so I hope all the leaders that are listening will really take a look, stand back and see, am I overly aggressive, or am I passive?

But I had an example of a client who was a CEO of a large company and he was too passive. And it’s actually more common than you’d think. I know that there’s a lot of aggressive CEOs, but there are passive CEOs out there too. And what he didn’t do was he didn’t fire people. He didn’t give performance feedback. He didn’t deal with conflict within the executive team or within the organization. He didn’t give consequences. He didn’t hold people accountable. And as you can imagine, that was really detrimental to the company.

The Passive Leader Who Wants To Be Everyone’s Friend

Yeah, I think he wanted to be liked. And I think he just naturally did not like conflict. And so, as we worked deeper with him, we found out why. But the impact on the organization was lack of trust, high turnover, especially with high-potential employees, a lot of conflicts, a lot of protracted conflicts that just kept going and going, people not collaborating, the executive team not collaborating to come up with strategy or to solve problems or use conflicts as a way to actually increase creativity in the organization instead of stamp it out. A lot of fear, too.

Ouch, right, yeah. And it would seem that, out the door, then goes innovation.

Yes. And there were a couple of bullies within the top leadership that he was not dealing with. And those bullies kept people from bringing up new ideas, they squelched the interaction and it was really a problem that he was being so passive.